The moment I stepped from the car, my soul filled with nerves and excitement to meet my host family for the first time, this moment that I dreamed to be a happy engagement was instantly interrupted by a viscous dog. The dog showed its teeth as it prepared to launch its body at me as I appeared from the car to enter his territory for the first time. I was afraid of this dog that my host family called, Toepong. For months I was afraid to leave the house alone, knowing I would startle the dog with my presence. If I did leave the house alone, I thought “it has been a while he should know me by now,” I was wrong. I would find Toepong leaping out from a hiding spot growling aggressively towards me until a family member intervened by throwing a rock or standing in front of me until the dog turned away.

Toepong didn’t come to know me until the day started feeding him my leftover chicken bones after dinner. I would call him by making this kissy face sound with my lips; he had been previously trained to know this sound meant food. He would come running from out of the night shadows to the kitchen door. The first of many times he would jump up on his hind legs with his front paws scratching at me to get the bones, until my young cousin told me he knew the command “muhtah,” which means “sit” in Kosraean. So, almost every night after dinner I would kissy face call him for his treat and but first command him to sit, and he would. Toepong never turned on me after that, it was the beginning of our friendship.

I have lived with my host family for almost one year now, and getting to know Toepong has been hardest part. My host family was embarrassed that he would attack me, as well as other visitors that would come to the house. He bit a few family friends, people that he had seen many times before. And on other occasions when drunken men came to our property and we wondered, “where is Toepong now?” He never seemed to attack the right people or be around when we needed him most. But, in the mist of that, him and I were improving our relationship. I would walk to the beach, and kissy-face call him; he would follow me and sit with me as I watched the ocean waves crash one after another. He would hide behind me with fear if my host mom or aunt tried to shoo him away with a broom. He would walk with me to school and give me a feeling of protection if men tried to talk to me on my way.

Yesterday, the children at my house told me the kosro (dog) was going to die. I didn’t believe them because they’re kids and they make shit up all the time, also my host mom and aunts always joke about killing the dog since he doesn’t bite the people he should and vice versa. That morning two men came to the house Toepong barked at their arrival. My host mom made the men coffee and breakfast and they stayed until the evening. I didn’t ask who they were or what they were doing, I knew, and didn’t want to. In the afternoon of the same day I went to the beach and Toepong followed me. One of the two men were occupying my usual hammock spot so I sat on a fallen tree trunk and Toepong curled up under my legs with his eyes watching the man in the hammock, Toepong sat with me as I watched the waves. After a while I went into the house to take a nap. When I came out of my room the kids told me the men had killed kosro, and took his body to eat (eating dogs, that’s normal). I asked them not to talk to me about it, still in denial I told myself he ran away. For the rest of the day I avoided going to the beach, I didn’t want to be reminded of the short and evolving companionship I shared with the dog.

The next morning, all of the children getting ready for church; they were looking great in their Sunday best so I asked them to pose for a picture at the beach. I had buried yesterday’s events in the back of my mind but was quickly reminded when I backed up to snap the picture and one of the girls said “watch out, kosro’s blood.!” Behind me, just bellow the tree trunk where I sat the day before, the sand was stained with the blood of Toepong.

In my American perspective it’s difficult for me to justify Toepong’s death. My host family says they will replace Toepong, but what if the new dog grows to not serve the purpose they intended, will they kill it too? In a cultural perspective, dogs in Micronesia are not friends they are a utility or food. I’ve come to terms with the fact that the incident was out of my control because this is not my culture; I’m only taking part in it.

One thought on “They ate my dog.”

There was an error retrieving images from Instagram. An attempt will be remade in a few minutes. 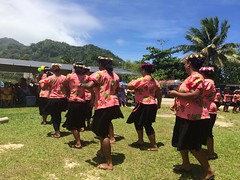 The views and opinions expressed in this blog are entirely my own and do not reflect any position of the United States government or the Peace Corps.
%d bloggers like this: